Denis Mukwege (/m?k?we??i/;[1] born 1 March 1955)[2][3] is a Congolese gynecologist. He founded and works in Panzi Hospital in Bukavu, where he specializes in the treatment of women who have been raped by armed rebels.[4] He has treated thousands of women who were victims of rape since the Second Congo War, some of them more than once, performing up to ten operations a day during his 18-hour working days.[4] According to The Globe and Mail, Mukwege is "likely the world's leading expert on repairing injuries of rape".[5]

In 2018, Mukwege and Nadia Murad were jointly awarded the Nobel Peace Prize for "their efforts to end the use of sexual violence as a weapon of war and armed conflict".[6]

Mukwege is the third of nine children born to a Pentecostal minister and his wife. He studied medicine because he wanted to heal the sick people for whom his father prayed, after seeing the complications of childbirth experienced by women in the Congo who had no access to specialist healthcare.[5]

After graduating with a medical degree from the University of Burundi in 1983, Mukwege worked as a pediatrician in the rural Lemera Hospital near Bukavu.[7][8] However, after seeing women patients who due to the absence of proper care often suffered pain, genital lesions, and obstetric fistula after giving birth, he studied gynaecology and obstetrics at the University of Angers, France, completing his medical residency in 1989.[7][8][9]

On 24 September 2015, he earned a PhD from Université libre de Bruxelles for his thesis on traumatic fistulas in the Eastern Region of the Democratic Republic of the Congo.[10]

After returning from studying in France, Mukwege continued working in the Lemera Hospital. After the First Congo War began, he returned to Bukavu due to violent incidents, and founded the Panzi Hospital in 1999.[9]

Since its foundation, Panzi Hospital has treated more than 85,000 patients with complex gynecological damage and trauma, an estimated 60 percent of injuries has been caused by sexual violence. Most of the patients of that time were coming from conflict zones. Mukwege has described how his patients arrived at the hospital sometimes naked, usually in horrific condition.[5] When he observed that genital damaging was being used as a weapon of war in the conflict of the late 1990s between different armed groups, Mukwege devoted himself to reconstructive surgery to help female victims of sexual violence.[9] The German Institute for Medical Mission (DIFAEM) has been supporting Mukwege's work with funds and medicines.[11]

In September 2012, Mukwege gave a speech at the United Nations where he condemned the mass rape occurring in the Democratic Republic of the Congo,[12] and criticized the Congolese government and other countries "for not doing enough to stop what he called 'an unjust war that has used violence against women and rape as a strategy of war'".[13]

Mukwege in his office in Panzi

On 25 October 2012, four armed men attacked his residence while he was not home, held his daughters hostage, and waited for his return to assassinate him. Upon his return, his guard intervened and was shot dead by the assassins. They missed Mukwege as he dropped to the ground during the shooting.[14] After the assassination attempt, Mukwege went into exile in Europe and the Panzi Hospital reported that his absence has had a "devastating effect" on its daily operations.[15]

He returned to Bukavu on 14 January 2013, where the population received him with a warm welcome over the 20 miles from Kavumu Airport to the city, especially from his patients, who had raised funds to pay for his return ticket by selling pineapples and onions.[16]

He is also himself a minister in a pentecostal church in Bukavu[17]. 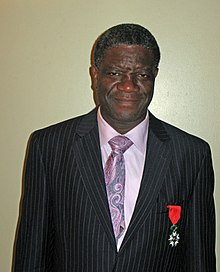 Denis Mukwege with the Legion of Honour, the highest award of the French Republic

Do you need to make special inquiries about our services?

To stay informed about interesting events and programmes of ISOFS, kindly fill and submit your email address below to subscribe for our newsletter.